Breaking News
Home / Tech News / RankScience closes $1.8M seed — and now only wants to replace human SEO staff if you don’t have any

RankScience closes $1.8M seed — and now only wants to replace human SEO staff if you don’t have any


A couple of years ago YC-backed RankScience, which offers AI-enhanced SEO split-testing, put a few SEO experts’ noses out of joint when the fledgling startup brashly talked about replacing human expertise with automation.

Two years on its pitch has mellowed, with the team saying their self-service platform is “augmenting human SEO ability rather than replacing them”.

The new roster of investors join a list of prior backers that includes Y Combinator, 500 Startups, Christina Cacioppo, and Jack Groetzinger.

So what took them so long? Founder Ryan Bednar tells TechCrunch they wanted to take their time with the seed, rather than raise more money than they needed — a position that was possible thanks to already being profitable at YC Demo Day.

“I admit that this is unusual,” he says of the slow seed, though he also says they did raise a “small amount” after demo day, before filling out the rest this month.

“I saw many YC batchmates raising massive rounds pre product-market-fit, which can end up being a mistake,” he adds. “We probably could have raised a few million at Demo Day but ultimately didn’t feel we were ready for it. I didn’t know what I would spend the money on, and we were growing without it, so we chose not to. I wanted to raise capital when I felt we were ready to use it for growth, and now’s that time.”

Bednar also says he is “selective” when it comes to investors — and “specifically” wanted to work with Initialized, saying he’s “known Garry and Alexis personally for years, and trust that they would support us in building a long-term scalable business”.

Commenting on the funding to TechCrunch, Initialized Capital’s Alexis Ohanian tells us: “Even though so many businesses depend on traffic from search, it’s a challenge for them to be data-driven about SEO. RankScience makes it easy to test changes to your website that can lift search traffic. They also automate a growing number of technical SEO tasks, which otherwise would take engineers away from building product and infrastructure, which is really exciting.”

RankScience plans to use the fresh funding to hire more AI and machine learning engineers, with headcount growth targeted at its SF office.

While the founders have stepped back from pronouncing ‘the death of the SEO expert’, they are still touting the power of automation AI for SEO — noting how, after crawling a customer’s site/s, the software automatically proposes “SEO enhancements and experiments” to customers — for “one-click [human] approval”.

It also includes what Bendar bills as a “self-driving car mode” — where the tech will deploy the touted “enhancements and experiments” without customer approval. But he concedes it’s not for all RankScience users.

“For about half of our customers, we’re their only SEO vendor so we automate SEO services 100% for them, and for the other half, our software augments human SEO ability, either from in-house marketers or agencies,” he says, explaining how the team has evolved their thinking on automation vs human agency and expertise.

“When we launched we didn’t think hard enough about what sorts of controls SEO managers at larger websites would want, and we tried to automate everything without giving marketers enough control. This was a mistake and we’ve worked hard on correcting it.

“This should have been obvious but it turns out that SEO managers are highly selective about what sorts of HTML changes our software might make to their webpages. So we’ve spent the past year building tools to give SEO marketers complete control over everything our software does, and also advanced editors and tools so they can create their own SEO enhancements and run SEO split tests through the platform.”

For those who make use of RankScience’s ‘Self-Driving Car Mode’ the software is replacing SEO staff “completely”, but he adds: “This works especially well for startups and medium size businesses. But SEO is such a multifaceted problem, we want to give larger companies with marketing teams complete control over our platform, and so we work with both types of customers.”

As well as (finally) closing out its seed round now, RankScience is also launching a new self-service platform for startups and SMEs — touting greater controls. 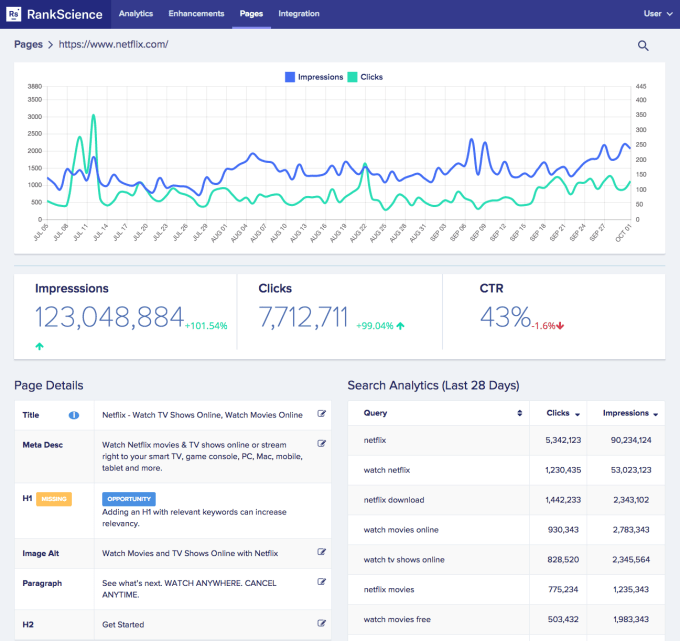 On the customer front, Bednar says they have “hundreds” of sites on the platform now — and are serving “hundreds of millions of page views per month”. Cumulatively he says they’ve deployed “millions” of SEO split tests at this point.

“Our customers run the gamut from startups just getting started with SEO to publicly-traded companies,” he continues. “Our best industries are SaaS, ecommerce, marketplaces, healthcare, publishing, and location-based sites.

“We’ve recently been working with more consumer goods brands, and we’ve also launched a partnership program so that we can work with SEO and Digital Marketing Agencies and independent consultants.”

He says the vast majority of RankScience users are based in the US at this stage but adds that Europe is a “growing market”.

In terms of competition, Bednar name-checks the likes of Moz, Conductor (acquired this year by WeWork), BloomReach and BrightEdge — so it is swimming in a pool with some very big fish.

“Most of these products are more akin to advanced SEO analytics suites, and we differ in that RankScience is 100% focused on data-driven SEO automation,” he says, fleshing out the differences and RankScience’s edge, as he sees it. “Our software doesn’t just tell you what changes to make to your site to increase search traffic, it actually makes the changes for you. (Now with more controls!)”

I'm a 50 year old PLC programmer from Burnley, UK. I severed my time as an electrician in the baking industry and soon got involved with the up and coming technology of PLC's. Initially this was all based in the Uk but as the years went by I have gradually worked my way around the globe. At first it was mainly Mitsubishi with a bit of Modicon thrown in but these days the industry leaders seem to be the Allen Bradley range of PLC and HMI’s.
Previous Vauxhall Combo Life 2018 REVIEW – Road test, price, specs and impressions
Next Most iOS devices now run iOS 12 according to Mixpanel’s data