Google is taking aim at photo face filters and other “beautifying” techniques that mental health experts believe can warp a person’s self-confidence, particularly when they’re introduced to younger users. The company says it will now rely on expert guidance when applying design principles for photos filters used by the Android Camera app on Pixel smartphones. In the Pixel 4a, Google has already turned off face retouching by default, it says, and notes the interface will soon be updated to include what Google describes as “value-free” descriptive icons and labels for the app’s face retouching effects.

That means it won’t use language like “beauty filter” or imply, even in more subtle ways, that face retouching tools can make someone look better. These changes will also roll out to the Android Camera app in other Pixel smartphones through updates.

The changes, though perhaps unnoticed by the end user, can make a difference over time.

Google says that over 70% of photos on Android are shot with the front-facing camera and over 24 billion photos have been labeled as “selfies” in Google Photos. 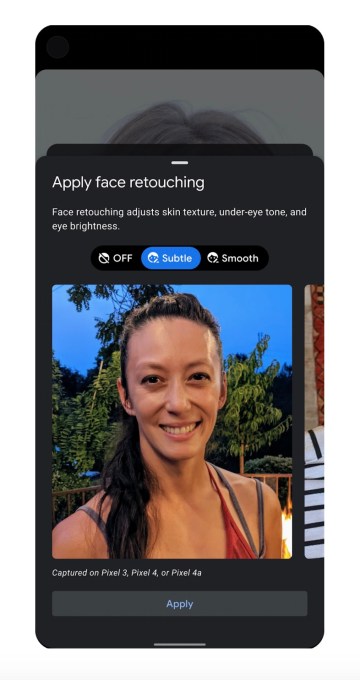 But the images our smartphones are showing us are driving more people to be dissatisfied with their own apparences. According to the American Academy of Facial Plastic and Reconstructive Surgery, 72% of their members last year said their patients had sought them out in order to improve their selfies, a 15% year-over-year increase. In addition, 80% of parents said they’re worried about filters’ impact and two-thirds of teens said they’ve been bullied over how they look in photos.

Google explains it sought the help of child and mental health experts to better understand the impact of filters on people’s well-being. It found that when people weren’t aware a photo filter had been applied, the resulting photos could negatively impact mental well-being as they quietly set a beauty standard that people would then compare themselves against over time. 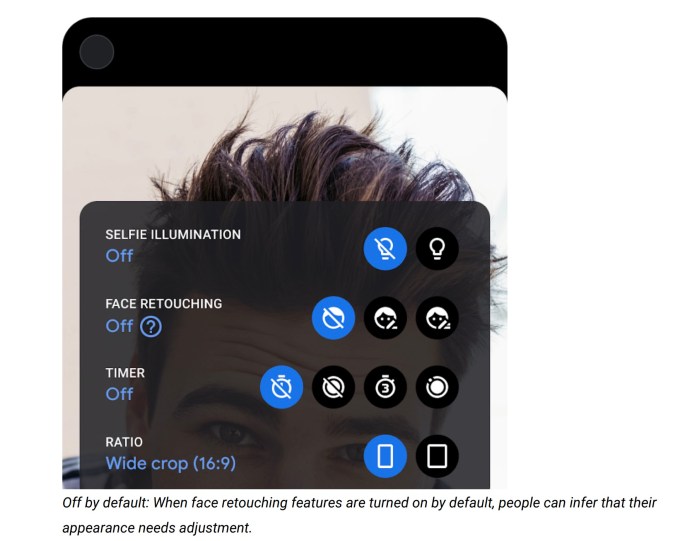 In addition, filters that use terminology like “beauty,” “beautification,” “enhancement,” and “touch up” imply there’s something wrong with someone’s physical appearance that needs to be corrected. It suggests that the way they actually look is bad, Google explains. The same is true for terms like “slimming” which imply a person’s body needs to be improved.

Google also found that even the icons used could contribute to the problem.

It’s often the case that face retouching filters will use “sparkling” design elements on the icon that switches the feature on. This suggests that using the filter is making your photo better.

To address this problem, Google will update to using value-neutral language for its filters along with new icons.

For example, instead of labeling a face retouching option as “natural,” it will relabel it to “subtle.” And instead of sparkling icons, it instead shows an icon of the face with an editing pen to indicate which button to push to enable the feature.

Adjustment levels will also follow new guidelines, and use either numbers and symbols or simple terms like “low” and “high,” rather than those that refer to beauty. 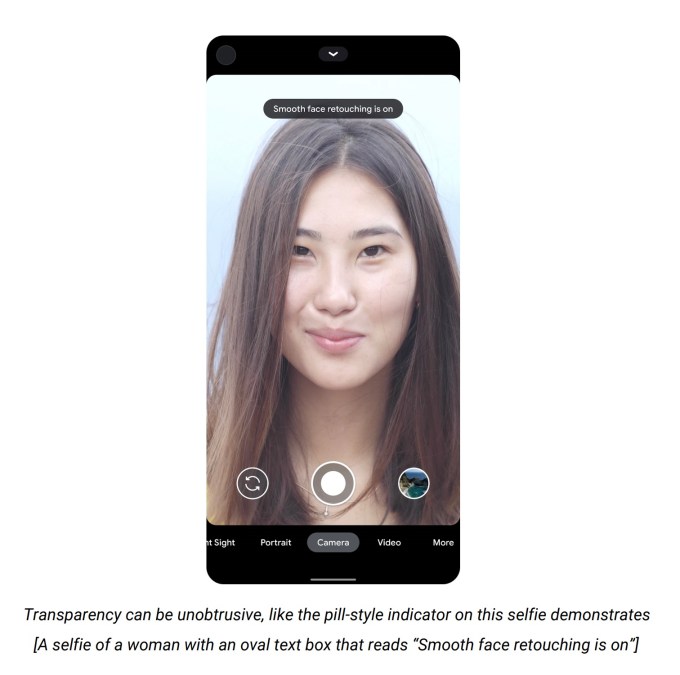 In Pixel smartphones, starting with the Pixel 4a, when you use face retouching effects, you’ll be shown more information about how each setting is being applied and what specific changes it will make to the image. For instance, if you choose the “subtle” effect, it will explain that it adjusts your skin texture, under eye tone, and eye brightness. Being transparent about the effects applied can help to demystify the sometimes subtle tweaks that face retouching filters are making to our photos.

Face retouching will also be shut off in the new Pixel devices announced on Wednesday, including the Pixel 4a 5G and Pixel 5. And the changes to labels and descriptions are coming to Pixel phones through an upcoming update, Google says, which will support Pixel 2 and later devices.

I'm a 50 year old PLC programmer from Burnley, UK. I severed my time as an electrician in the baking industry and soon got involved with the up and coming technology of PLC's. Initially this was all based in the Uk but as the years went by I have gradually worked my way around the globe. At first it was mainly Mitsubishi with a bit of Modicon thrown in but these days the industry leaders seem to be the Allen Bradley range of PLC and HMI’s.
Previous Pixel 5 and 4a 5g get the same, improved cameras with rear ultrawide lens, Night Sight portraits and more
Next Outlook is down: Microsoft web outage hits users worldwide

The Justice Department has filed its antitrust lawsuit against Google

This Week in Apps: Apple’s big event, lidar comes to iPhone, Android gets a new IDE

The noise-cancelling over-ear headphone category is an increasingly competitive one, and consumers have never been ...